We have successfully received your details.
HOW TO ORDER
Skip to content 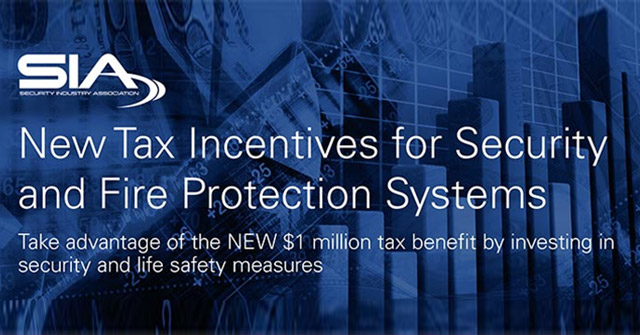 Take advantage of the NEW $1 million tax benefit by investing in security and life safety measures The Tax Cuts and Jobs Act (P.L. 115-97) signed into law on Dec. 22, 2017, included two important changes to the U.S. tax code providing incentives for businesses to invest in new security, fire protection and alarm systems.These incentives were part of the broader effort in the new law to produce long-term economic growth by encouraging business to make capital investments.

Generally, the costs of commercial-use security, fire protection and alarm systems are capitalized and depreciated over a recovery period of five, seven, 15 or 39 years, dependent on factors such as the type of system purchased, the integration within a building structure, whether the installation involves owned or leased property, and the relationship to business activity.

Beginning in 2018, the new tax law allows many businesses to write off the full cost of such systems as an expense for the tax year they were placed in service, eliminating the capitalization requirement.

Previously, small- and medium-sized businesses could deduct most business-related equipment placed in service during a year, up to $500,000 not exceeding taxable income (subject to carryover rules).

For the first time, and on a permanent basis, security systems and fire protection and alarm systems are now treated as qualifying Section 179 property under the law, despite being considered building improvements (real property). See 26 U.S. Code § 179.

Additionally, businesses can now deduct up to a total of $1 million in purchases that qualify for Section 179, doubling the dollar limit. This deduction phases out on a dollar-for-dollar basis after a business has $2.5 million in total qualifying purchases, reaching zero at $3.5 million. After 2018, the increased limit and phaseout threshold are indexed to inflation.

Beginning in 2018, qualifying businesses can now deduct the costs of new security and fire protection systems, up to a total of $1 million under Section 179, which were not eligible prior to the new law.

Disclaimer: Business tax deductions are complicated. The information included here is intended for general information only and is not intended to be tax or legal advice. Please consult your tax professional before making business decisions that could affect your tax situation. Each business situation is different and tax regulations change frequently. New

Certain security and life-safety products may qualify for bonus depreciation based on the length of the applicable recovery period, which tends to be less when use is related directly to the primary commercial activity of a business.

Certain improvements to the interior of a building may qualify under the new law’s definition of Qualified Improvement Property (QIP). However, Congressional action is expected early 2018 to clarify that QIP is bonus-eligible, as this was not explicitly stated in the new law. Once corrected, a wider range of security and life-safety products are expected to qualify.

Why Does This Matter?

Established in 1969, the Security Industry Association is the leading trade association for global security solution providers, with more than 800 innovative member companies representing thousands of security leaders and experts who shape the future of the security industry.